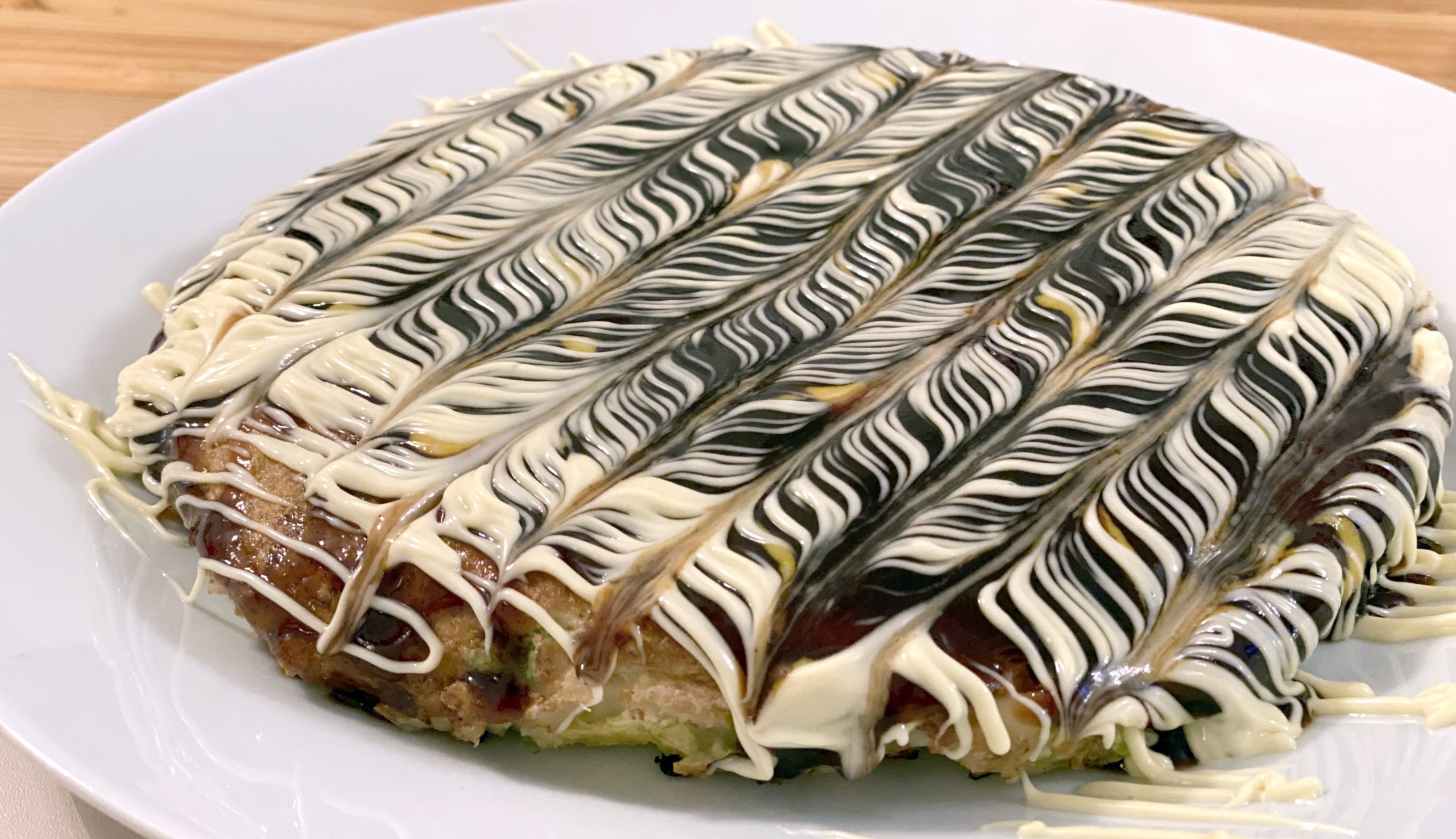 Before we dive into the Okonomiyaki recipe, first what exactly is it? Okonomiyaki directly translated means “how you like it cooked”. It’s a delicious savoury pancake, typically cooked on a hot plate, or teppanyaki grill plate. The staff usually ask if you’d prefer to make it yourself or have them prepare it for you. If it’s your first time having Okonomiyaki at a restaurant, definitely go with the latter. The staff will make it right in front of you, so you can see how it’s done properly. Go to a smaller, more local restaurant if you have the chance, too. It’s always a great laugh when newbies try and flip their first Okonomiyaki! The restaurant owners of the more local places will actually come over to watch you give it a go!

Okonomiyaki is more often than not enjoyed with an ice cold beer. For any British readers, I’d say the closest thing that resembles Okonomiyaki would be Bubble and Squeak. It’s Osaka’s soul food at it’s finest, and certainly makes for an excellent hangover cure.

What’s the first thing that comes to mind whenever Okonomiyaki is mentioned?

Definitely the time I was trying to explain what it is to my mum over a video call. I was living in Japan and had recently tried it for the first time. It’s extremely difficult to do Okonomiyaki any justice by describing what it is literally! “Chopped up cabbage in batter with sweet Worcestershire sauce and mayonnaise” was something close to what I said. Needless to say, I could have done a much better job of describing the infamous Osaka dish! Luckily, my family came out to Japan a few months later and were able to try it for themselves. They now regularly make it at home as it’s a family favourite!

What inspired this recipe?

If you have enjoyed Okonomiyaki in Japan, then it is no doubt something that you have craved ever since. I was lucky enough to pick up the traditional Okonomiyaki recipe during my time in Japan. I tested it out on friends too, to ensure it was as authentic as possible. When I returned to the UK, I was very excited to make it for my friends and family. I was not prepared for how difficult it would be to get hold of the ingredients! And once I found the ingredients in Japanese and Asian supermarkets, the price was an even bigger surprise!

What makes this the only Okonomiyaki recipe you need if you live outside of Japan?

Ingredients for the Okonomiyaki recipe (4 portions)

Method for the Okonomiyaki recipe

The last thing to do is sit down and enjoy it! Okonomiyaki is traditionally eaten with tiny metal spatulas. Although, some restaurants will give you regular spatulas to cut and serve the okonomiyaki with. You can then use chopsticks to eat it from your own plate.

Okonomiyaki freezes really well! Just make sure you freeze it before adding any of the sauces. On the day that you want to eat it, leave it out to defrost completely. Add a little oil to a pan and heat it on the lowest heat, flipping it to heat both sides.

Whether you followed this recipe out of nostalgia or if this is your first time making it, please let us know in the comments what your thoughts are! We are keen to hear “how you like it cooked”! Drop a comment below to let everyone know your spin on this classic Osaka dish!

Head to Hachi for Authentic Japanese BBQ in London

Wow! It looks like the real thing! Thanks for the recipe! I’ll have to try it when I’m in the mood for Okonomiyaki. I’ll be adding soba noodles for Hiroshima style okonomiyaki!

[…] of our Bristol friends and a certain authentic Japanese restaurant next). Stay tuned for more Japanese recipes too and thanks for […]

[…] the owners hails from. If you are not familiar with this Japanese savoury pancake, please read an explanation of Okonomiyaki along with our […]

[…] What’s the first thing that comes to mind whenever Okonomiyaki is mentioned? […]

[…] more recipes on the site and if you’re interested in making Okonomiyaki, check out our recipe here. Also, we’d definitely recommend following Kurumi on Instagram or her YouTube channel as […]

Where to find Sushi on a...